(a listening deeply gift from the urban inside)

A speaker faced down the bench
where we sat, directly
adjacent to the Duet.

Their aging laptops looping maybe scooping
the sound from their devices,
strung and hung in air plus wired,
synth sound supple and rounded
towards their combined long-tone sculpting.

As the bench began to resonate,
this pool of glacial tones clustering
and extended found the grains
of smooth planked architecture,
drawing the room in sound.

Such sand-dune-shaped sonority
left a freedom in long form structures.

Instead then
a bowed extent
alongside a weaker vibration wood,
shifting underneath the wound six.

Swimming hands proximate
and glanced through
inflating resonances,
a subtle but driving mix
in the center
of feed loop backs,
underneath the bridge.

Careful by-finger tilted wrist
slight and steady,
each formant-mans emitted
layered in oscillation,
breeding combinations where the space itself
breathed against its moorings.

Then the building hummed
some hidden motor, vent, or rotor sung.

Crick the other colored side
in delicately high frequencies
that appeared in the sonic atmosphere
like fireflies drifting into dusk.

John Cage liked to borrow. Whether in musical style or approach to theatre, the materials themselves are often not his. Musical scores evolved into graphic iconography or instruction governed by brackets of time and/or duration. Written pieces were amalgamations, mesostics “written through” other authors’ work, or more “cut-up” style constructions of various texts.

It applied to his philosophies, too. He is known to take bits and pieces of Eastern practice and weave their concepts into his worldview and compositional process. Concepts like the Huayan Buddhist “interpenetration” of all things were slightly bent by Cage, who found them useful for composing, but maybe slightly ignoring (or denying) any inherent interconnectedness.

Such synergy is often attributed to improvisation, like a jazz combo. On the contrary, Cage was very much about the accidental interpenetration of elements by downplaying any relationship importance between them at all. The idea of “playing off each other” as if playing jazz was not allowed, simply because it wasn’t scored that way.

These were simply concurrent events that coincided in layers against each other, necessarily connected by nothing but the experience, indeterminate and interpenetrating. It seems to imply chaos, and that is precisely how my wife described the LA Phil west coast premiere of Europeras 1 & 2 to me afterward: “too much going on for your brain to comprehend” and “the weirdest thing you’ve taken me to yet.”

Now that’s saying something! We’ve participated in Long Beach SoundWalk multiple years, we’ve seen some outrageous installations and concerts. Even my music is pretty damn strange. Whether or not this actually hit the tip of the Weirdometer, there was one thing we agreed upon: nothing was happening, and everything was happening.

My wife and I have never been to a movie studio lot, so it was a new experience just arriving and finding our way back through the closely stacked identical warehouses to Studio 23. The Sunday matinee crowd fascinated us. We guessed the throng held Cage fans, opera fans, music students, season ticket pass holders and supporters of LA Phil, friends of the cast and orchestra, and even scattered fashionistas.

Inside was a simple proscenium stage configuration, the audience rising up and back, fly loft and everything built into this huge soundstage. On each side of the main stage were three columns of , with most major instruments represented at least once. The stage itself was an 8×8 grid, marked with numbers 1-64 to represent hexagrams of the I Ching, which itself is used to drive the chance operations required for creating the performance based on Cage’s score.

The distinction of 1 & 2 is a programmatic one, they have always been performed together as a 90 + show. So we settled in for a good bit of nothing we ever expected. Although I have never seen the Europera scores first hand, I have performed many other Cage pieces that revolve around the same concept: time brackets of performed material according to decisions arrived through chance operations. Many of his scores like this were performed simultaneously, so that not only did each individual composition interpenetrate with itself, it also did with the other piece.

The Europeras are a culmination of this approach by Cage, and not only because they are among the last works he composed before his death in 1992. Chance procedures determine every aspect of the production, from costuming and scenery to blocking and the placement of arias selected from the standard repertoire. In the midst, selections from Truckera (a tape of 101 layered European opera fragments) were broadcast stereoscopically across loudspeakers above the audience, giving the sonic illusion a “truck of opera” was rattling by the performance and drowning everything out.

The entire work becomes a brilliant collage of sight, sound, dimension, and movement. There are entirely mind-bending Fluxus moments of absurdity, subtle sequences of sublime beauty, and a good amount of unintended comedy.

The LA Phil performance mostly held true to Cage’s intent. There were dancers moving independently of both scrim- and prop-based scenery (also sequenced with chance operations), but also acting as stagehands and crew to move things around. Very seldom it starts to drift, as when these same dancers become engaged with the opera singers in their individual scenes.

I have to hand it to the singers in this production. It is not hyperbole to state that seeing this performed is at the top of my bucket list. These folks were charged with non-traditional blocking, ignoring every other musical cue they hear around them while staying in-tune as possible, having to watch the large count-up clocks posted on each precipice of the stage, navigate indeterminately moving scenery and other actors, all while performing a fully committed aria wearing costuming and performing blocking both separately derived by chance operations and completely unrelated to the entire way they were taught to interpret an aria.

Some did this better than others. One of the more successful sang “ du, holder Abendstern” from Wagner’s Tannhäuser, outfitted in full astronaut garb (minus helmet), the entire time both lying and moving around a hospital bed, while any number of other arias, scene changes, and lighting queues happened around him. I found it masterfully performed against a magnificent bed of chaos.

Many of the singers’ performances were like this. As was the orchestra. There was an incredible amount of commitment in this show that is absolutely vital to Cage’s music. The entire ensemble – from stage crew and props to performers and designers – dialed in on this aspect of performing Cage and it comes through.

Lighting queues and design were scored completely separately as well, often focussing on the audience, into the ceiling of the warehouse, across the back of the building behind the open stage area. Scrim backgrounds, some looking quite ancient, dropped at various elevations, frequently covering an entire “scene” behind it due to the chance operations involved. Sometimes individually numbered squares onstage were illuminated, amorphous areas of color appeared, and more than once a strange ladder descended made entirely of what appeared to be fluorescent rods.

Sopranos galloping on life-size fake horses carried by dancers, a baritone singing (Mozart?) while preparing a steak on a hot plate with chopped vegetables, a tenor in drag performing what I think was from Rake’s Progress (Stravinsky), the Toreador Song (from Carmen) staged to a commercial being filmed for hair products. Some scenes had no singing at all, like the baritone who sunbathed in 70s garb for what seemed like an eternity before he finally got up and sang a short aria. Or the girl backward in a running belt vibration machine drinking a coke with a straw in a full Wizard-of-Oz Dorothy outfit (complete with ruby slippers) and maybe sang, but maybe didn’t. Or the soprano auctioning off small statues to members of the orchestra, complete with gavel banging. Yoga and Queen of the Night, I think it was?

Except in one rare case where a tuba belted out Flight of the Valkyries, the orchestral parts were not as immediately recognizable as the arias, but equally enjoyable in the mix of it all. I especially loved interjections from percussion, like sudden cybals and tympani. The effect of this differentiated musical tissue was like an extended meditation on simultaneous sound against a landscape that was constantly in motion.

Overall, Europera 1 was more recognizable for me and felt like it breathed with long sequences, wonderful moments of silence where the HVAC in the huge studio warehouse took its solos, combinations of the orchestra that did not feel at all chance-derived, and I felt drawn in the entire time. Europera 2 felt more compressed, more frenetic, maybe more immediately interesting but definitely more chaotic. Nevertheless, it ultimately wasn’t as memorable as the first, and yet felt more voluminous and energetic. Even the chance-derived synopses (related to nothing) reflect this telescopic pattern:

He falls deeply in love with a beautiful who staggers into the hut. He buys a love potion. Her candle goes out and impressed by his wealth she decides to marry him on the spot. The would that after three years he will have himself crowned Emperor with the evil one’s help in exchange for his love. At she flees; whereupon he gathers all his strength, she becomes passionately attached and begs a hermit’s refuge.

She sells his soul to her father with the aim of improving his impaired finances. Even her loving relatives are shocked. They rescue him. He retires. She agrees. Torn, they, in shame, pardon all conspirators. He agrees to marry her. She kills herself. He is chosen the victor.

After the final curtain dropped at precisely the correct time, we left the soundstage, the sun barely setting as we found our way out of Culver City. I reflected on how difficult it is to convey the real power in this category of Cage’s compositions without experiencing them firsthand, live and in person. In addition to the power of simply listening and seeing, his works of this kind express a sort of pandemonium that is at the same time masterfully controlled and undoubtedly a “work by Cage”: meticulously crafted experiences in anarchy.

Here’s my own collection of aural glass animals for you to enjoy… a mix of groovy and beaty dreamscapes (3:38 @ 256K cbr mp3), recorded live for the Fullerton Art Walk on Friday (April 6), accompanying tattoo artist Jon Kelly (known for Olde Tyme Tattoo) as he applies his latest in biomechanical fashion.

…by the way a vinyl mix…

As you may or may not know, 2012 is the Centennial of John Cage’s birth, and among its many celebrants (including myself, details to come…) is “transmission arts” collective Free103point9, who work in conjunction with WGXC 90.7-FM in upstate New York to present works specifically designed for air-borne electro-magnetic transmission – Radio, that is.

As you also may or may not know, John Cage wrote an abundance of pieces that called for either radios as instruments or as the listening medium (i.e. works designed specifically for radio play). Many of these are some of the first electro-acoustic works ever, predating most electronic music, and an inspiration to countless followers.

In fact I plan on submitting my own radio-accompanied piece (in graphical notation no less) influenced by Cage, written over a decade ago while still studying his music in grad school, called Riverbroadening. I have two really nice recordings by Comma in both DC and NYC, and will be putting together a 2012 version with (hopefully) some, all, or slightly more than the original folks involved. 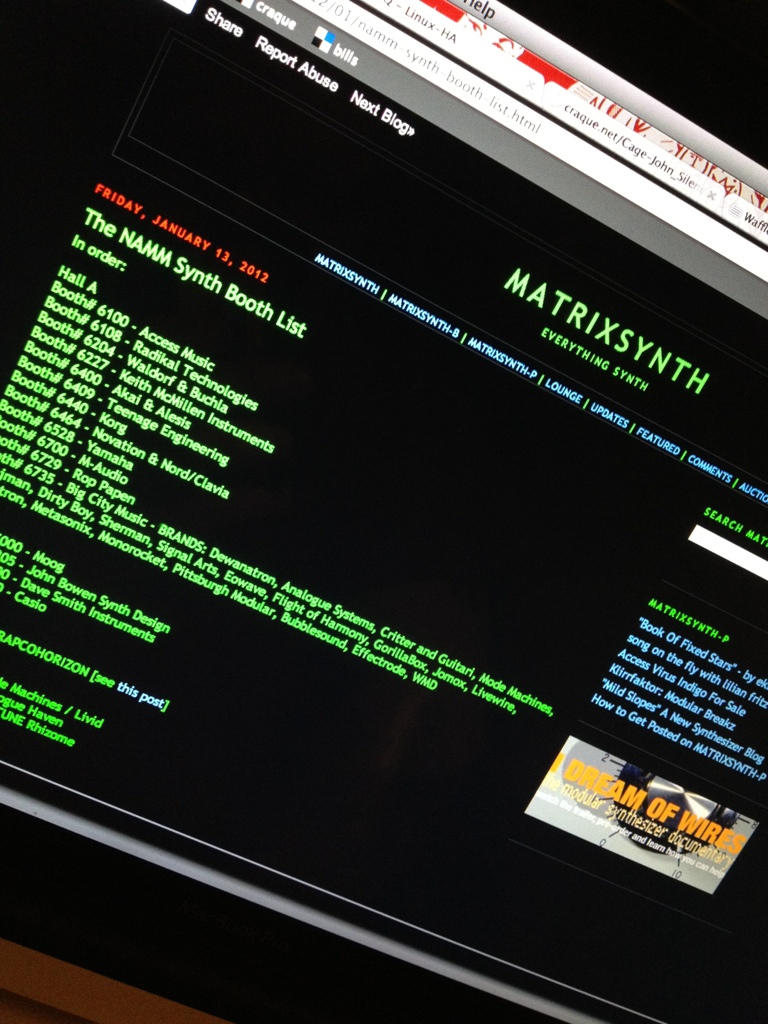